Many of you have surely heard of the chairs of the art deco era. What does it consist of? Don't panic. We're here to guide you.

Origins from the Art Deco era

This term first appeared at the international exhibition of modern decorative and industrial arts in Paris. In France, the term art and deco was very popular from 1900.

It was not until 20 years later that this style was much appreciated by people from the upper bourgeoisie.

The specificity of the chairs of the art deco era

Be aware that all the furniture that was designed between 1910 and 1930 emphasizes colors and patterns. Some designers also use floral patterned wallpaper.

They draw inspiration from chromium, metals and wood. For a friendly luxury atmosphere, you can install your art deco armchair in your living room.

Aside from that, the art deco-era armchairs were designed with faux leather seats.

After the advent of the art deco era, Louis XIV-style armchairs were very popular. As the name suggests, it was the furniture styles during the reign of Louis XIV, that is, between 1661 and 1715.

Louis XIV is known as a great art lover. This is what made France famous and praised.

The specifics of Louis XIV's armchairs

Empire chairs are recognized for their imposing styles with perfect symmetry. Indeed, art must be well done in order to be able to appreciate it at its true value. In general, the chairs of this period have padded and imposing backs. To add a touch of glamour, the feet have been designed either as a balustre or as a console.

The material used: they were designed using precious wood: mahogany, oak, almond and others. Sometimes artists use unusual components such as bone, ivory, scales and others.

Also be aware that the most commonly used decorative elements are acanthus flowers and lily.

Unlike the styles of Louis XIV armchairs, its design is simple. The Louis XV armchairs marked the years 1725 to 1750.

The specifics of Louis XV's armchairs

With its curved feet and in the shape of small animal legs, the aviator chairs marked the period of humanism. The most commonly used decorations are foliage, rockery and rushes. These make the beauty and splendor of Louis XV armchairs.

Rococo armchairs marked the years 1774 to 1785. It is recognized thanks to the choice of decorative elements. Indeed, they are more marked by flower patterns. They were designed using solid wood and wrought iron. 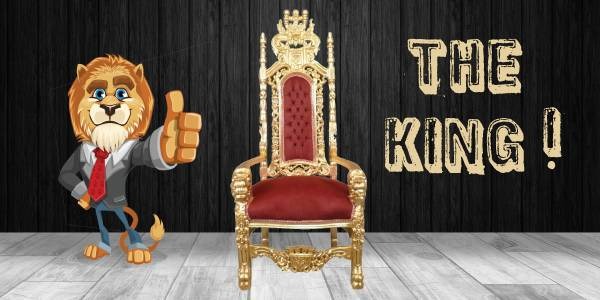 A baroque armchair in gold

The gold baroque armchair is a seat whose frame is made of gilded wood, its structure is usually gilded wood, upholstered in luxurious fabric.
Lire la suite
10 Feb 2022, 13:10 Chair Rococo 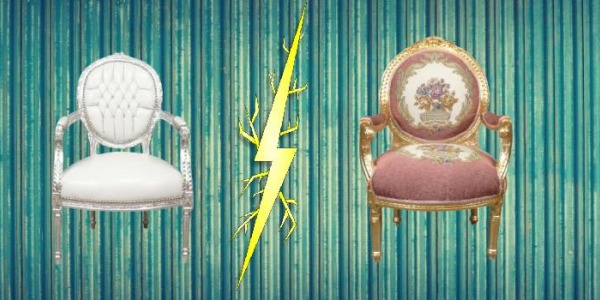 The modern Louis 16 armchair is either a reproduction, or an old armchair restyled after being restored with modernized fabrics, it can be medallion back or classic.
Lire la suite
06 May 2021, 11:53 Chair Louis 16 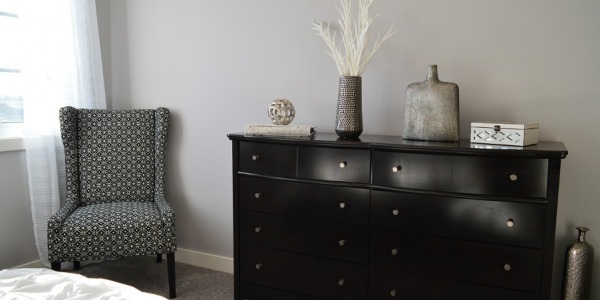 The Louis XVI armchair with ears

The Louis XVI armchair with ears has along the armrests an extension called ears, which allow to lay the head on the side
Lire la suite
01 Apr 2021, 14:36 Chair Louis XVI 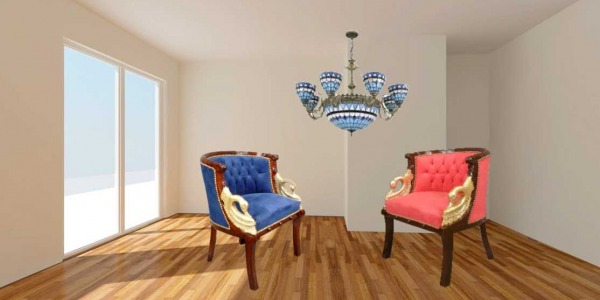 The Swan-necked Empire gondola armchair is easily recognizable with its sculptures made up of gilded wooden armrests.
Lire la suite
29 Mar 2021, 15:12 Chair Napoléon 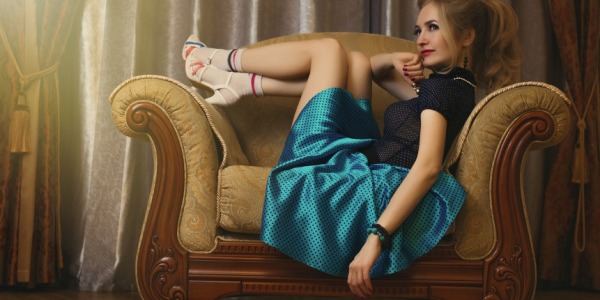 Need a good plan to buy a Louis Philippe armchair? To do this follow our recommendations and place your seat in the best corner of your home for a classic décor.
Lire la suite
29 Mar 2021, 14:27 Chair Bergère 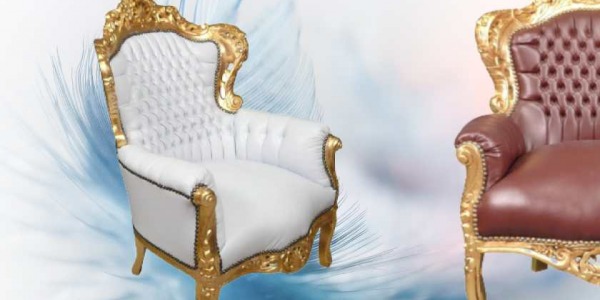 The baroque armchair in beige leather

The baroque beige leather armchair is a reproduction of the old seats, the leather brings to your seat an excellent comfort while keeping this antique look.
Lire la suite
26 Mar 2021, 15:43 Chair Baroque 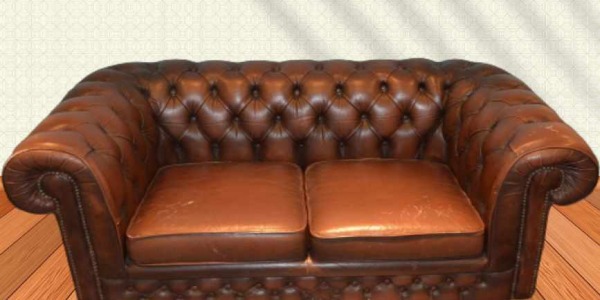 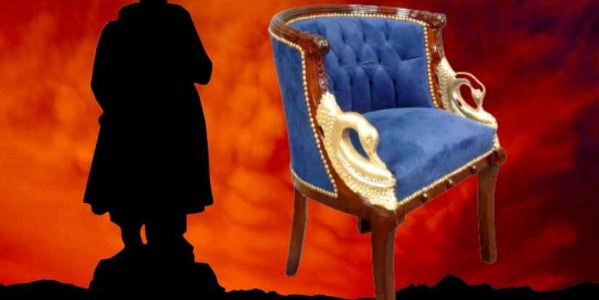 The price of an Empire armchair depends on several things, including the time it was made, its signature and its condition.
Lire la suite
15 Feb 2021, 13:48 Chair Napoléon 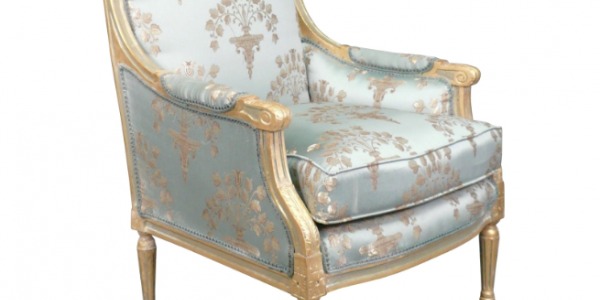 There is a wide selection of Louis XVI armchairs from the time, they have seats and backs that differentiate them.
Lire la suite
14 Feb 2021, 14:20 Chair Louis 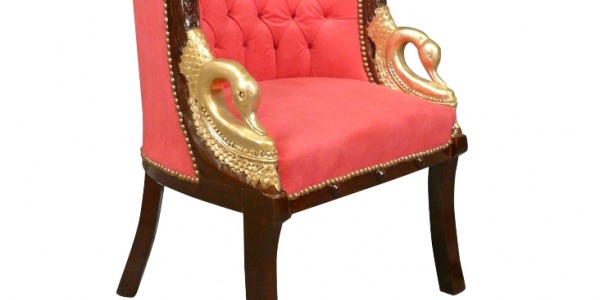 The consulate chair is an old mahogany seat that inspires prestige, once it was the armchair of personalities, it was found in the administrations of senior officials.
Lire la suite
05 Feb 2021, 14:54 Chair Napoléon 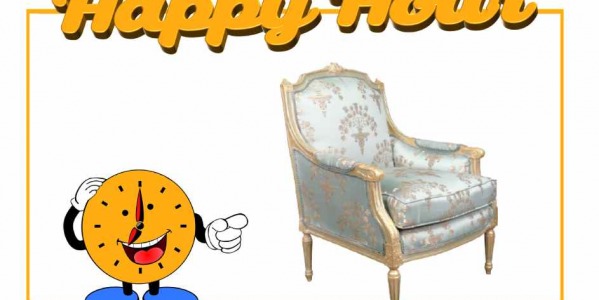 Enjoy the comfort of a Louis XVI armchair that you bought used, priced and online comparison of the best style seats for the living room.
Lire la suite
26 Jan 2021, 14:21 Chair Louis XVI 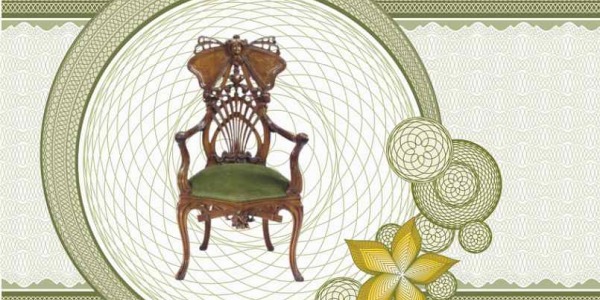 Art Nouveau is a decorative style inspired mainly by nature, fauna and flora. It is an art that follows the curves of its subjects.
Lire la suite
18 Jan 2021, 15:20 Chair HT deco 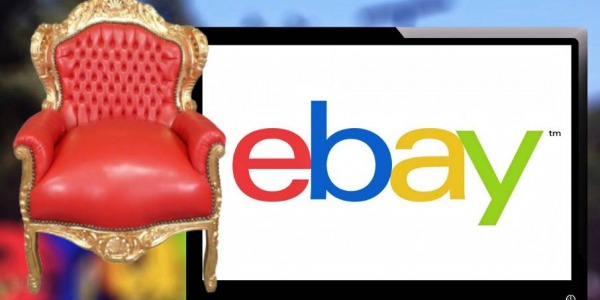 On the Ebay sales site, there is a wide selection of baroque armchairs made of solid wood, used models, antiques and reproductions.
Lire la suite
17 Jan 2021, 15:50 Chair Rokoko 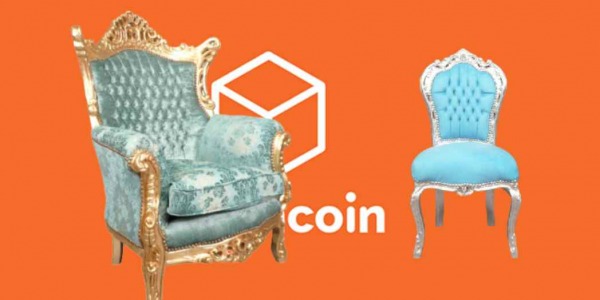 The baroque used chair is often cheaper than an authentic antique, to find the right deal is easy with our guide.
Lire la suite
13 Jan 2021, 14:40 Chair Barock 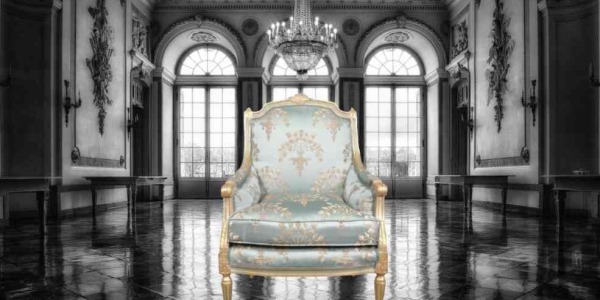 The Louis XVI armchair is a remarkable and comfortable seat, the padded armrests differentiates it from the classic models.
Lire la suite
04 Jan 2021, 08:20 Chair Louis XVI 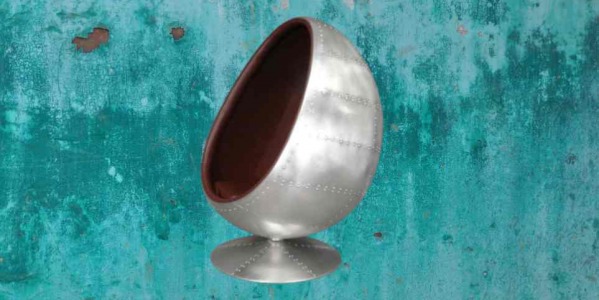 The vintage style decoration is fashionable in the interiors, the leather and metal club armchair is appreciated for this type of decoration.
Lire la suite
03 Jan 2021, 12:01 Chair Aviator 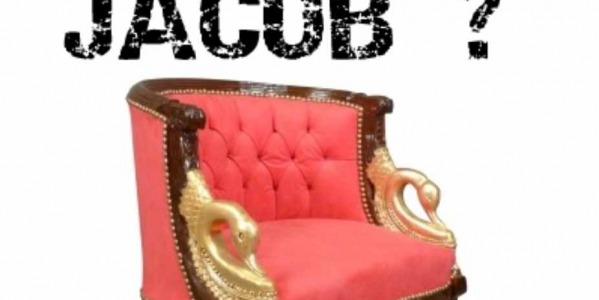 Jacob-stamped Empire armchairs are highly sought-after seats and have a lot of value learn to recognize so as not to miss them.
Lire la suite
10 Dec 2020, 14:11 Chair Napoleon 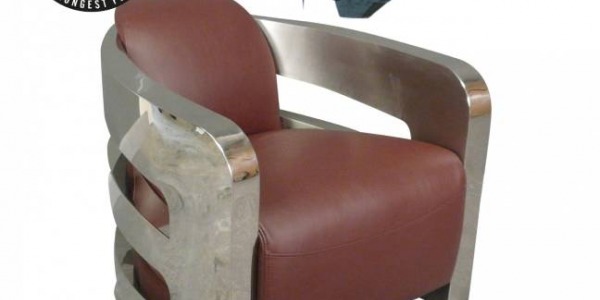 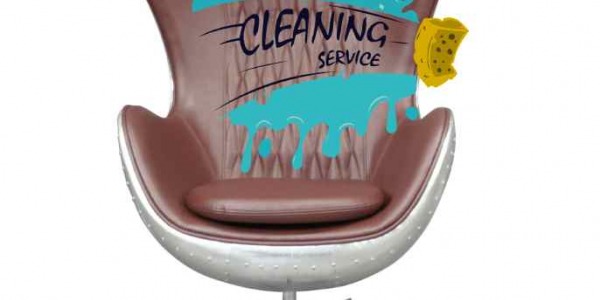 How do you clean your aviator armchair? 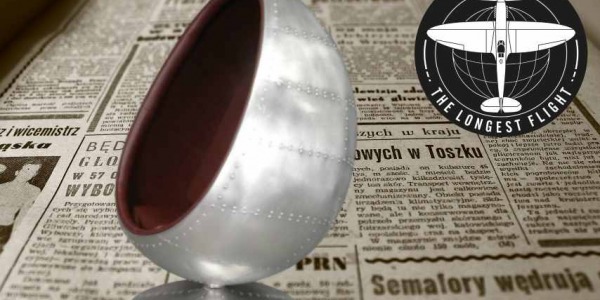 Want to buy a used aviator egg armchair, but know this design seat model, and do you know where to buy it?
Lire la suite
28 Aug 2020, 10:38 Chair Aviator 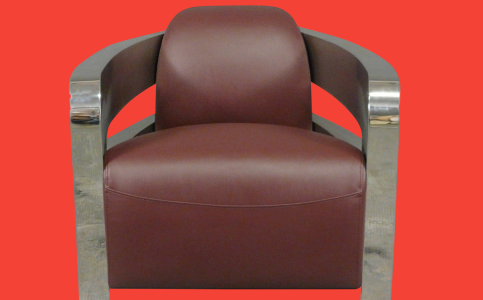 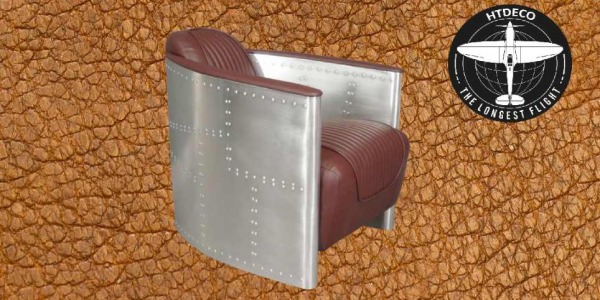 Choosing a brown leather aviator armchair is a good choice for your living room, but do you know where to buy it?
Lire la suite
26 Aug 2020, 12:12 Chair Aviateur 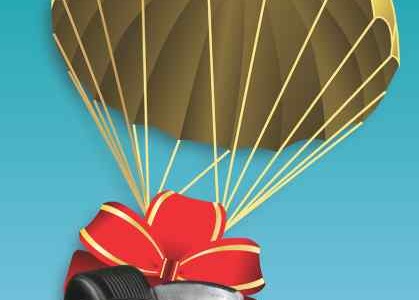 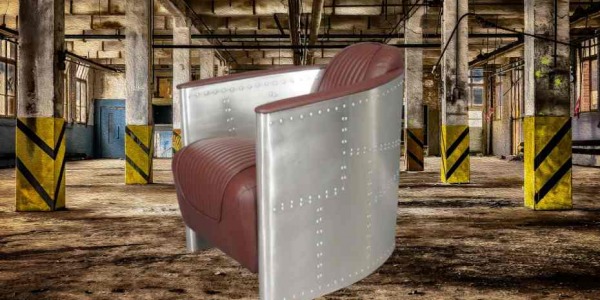 The industrial armchair has existed since industrial times, designed to work, it is a sturdy wooden and metal seat, sometimes lined with leather on the seat.
Lire la suite
08 Aug 2020, 11:54 Chair Cuir et Métal 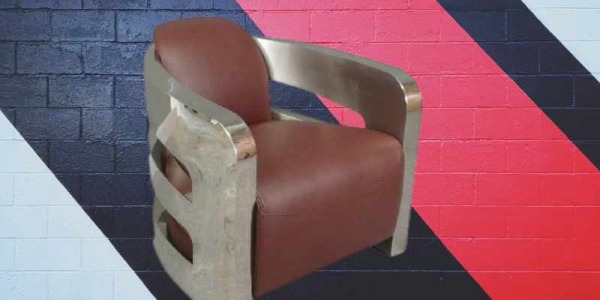 Design chairs have gone through history, there are many models of seats appeared over time made in different materials.
Lire la suite
06 Aug 2020, 12:30 Chair Mr Deco 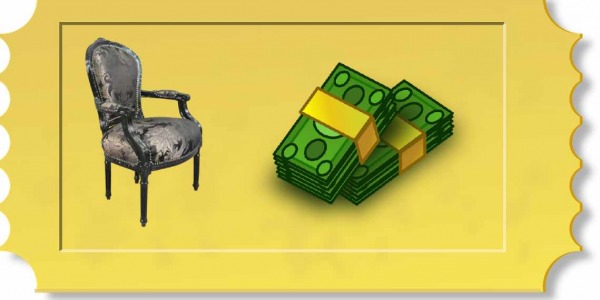 The price of an old Louis XVI armchair

When buying from an individual or antique dealer, it is important to be able to estimate the value of a Louis XVI armchair, find out how.
Lire la suite
04 Aug 2020, 09:02 Chair Louis XVI 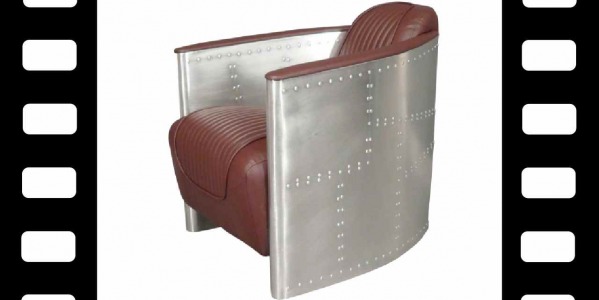 Aviator chairs for sale at HTdeco 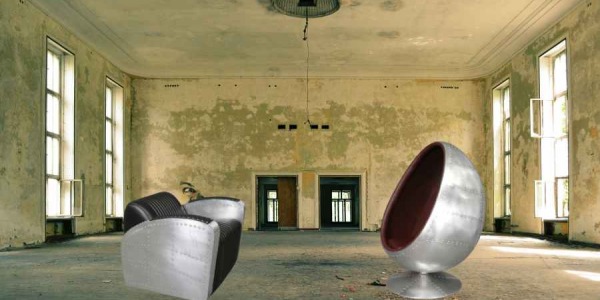 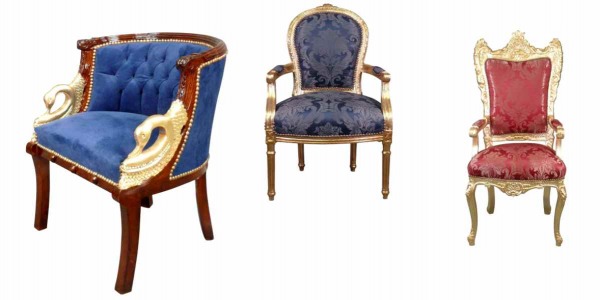 The 18th century armchair is a unique and historic seat that is an excellent seat for the house, as it is often associated with French royalty and its courtyard.
Lire la suite
24 Jul 2020, 15:10 Chair Louis 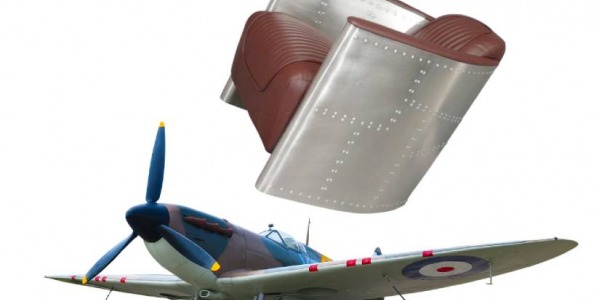