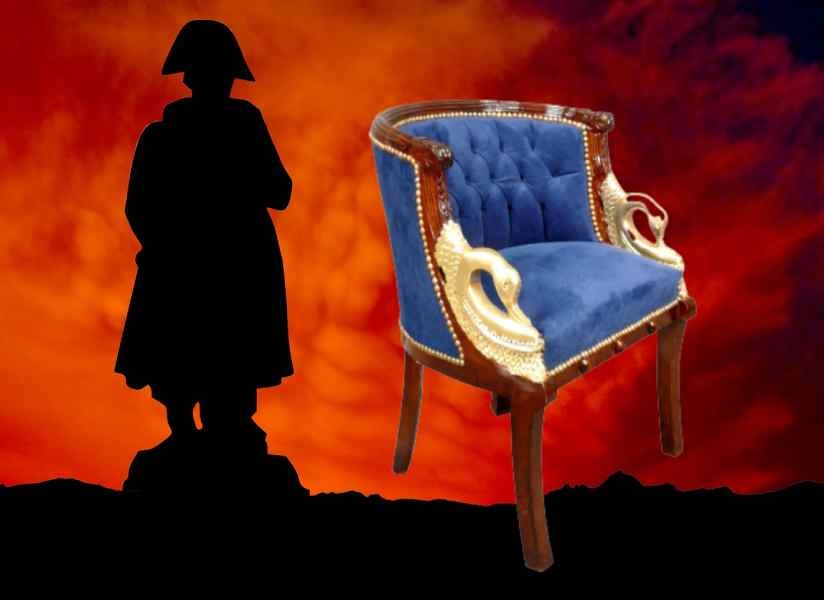 The Empire armchair is in the category of antique furniture. There is a seat with two armrests that combine the wood with a bronze finish to give a royal look to the chair. The detail and precision of the period have been taken to offer a quality overall visual that will fit perfectly with you.

How do I recognize an Empire armchair?

The greatest cabinetmakers of the time

What is the price of an Empire armchair?

The Empire style dates back to the time of King Napoleon I who ruled from 1804 to 1814. Inspired by ancient Egyptian civilizations, this style lives up to the grandeur, fame and prestige of this former king of France. It is also possible to sometimes hear about the Napoleon style first. This Style, inspired by Louis XVI, has been reworked to the splendour of Napoleon I

We find the term Empire that corroborates with this idea.

It is a style that has the will to break with traditional customs. Characteristic of the period, these creations mark the modern interior furniture. Indeed, the development of this way of producing is part of this desire for change, instilled by the French revolution.

The empire style includes different pieces of furniture such as offices, shepherdesses, offices, gondolas or poidras writings that will enhance your living room. It is also possible to find beds with soft lines characteristic of the fashion of the time.

The functionality of the furniture is associated with a relevant production value that highlights the elegant spirit of a meridian or sofa for example.

During this period, it is possible to identify different components of the interior furniture that make their appearance. There are mahogany furniture, sometimes also beech, rosewood or cherry trees that are darker and more economical woods. The special character of this style lies in the ornaments that are added as work finishes and brings to the prestige of the furniture.

The success of this piece of furniture also comes from these primers and palms of the arms and the footing that are finely last a blond on the sides or the studs.

There is an opposition between productions that are massive, but with finishes in a very elaborate style. These light gilded trims to the furniture are enhanced by the contrast with the raw wood.

It is then necessary to imagine this furniture in the private apartments of King Napoleon I in a post-revolutionary décor. Some of these pieces of furniture were still present during the time of Louis XVIII, his successor or Louis-Philippe.

How do I recognize an Empire armchair?

We have therefore seen that the Empire movement has some notable characteristics. It is indeed these elements that we will look for first: a raw material, massive, made mainly of mahogany, adorned with bronze gilding to embellish the whole visual. 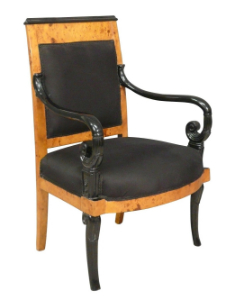 There will then be a comfortable seat with two armrests, erected on 4 feet. It will then be necessary to look at the details to succeed in highlighting an empire armchair rather than a poorly made copy. We then have from the bottom up:

- From the front feet curved inwards, in general, they will be flat but sometimes sculpted in such a way as to resemble animal legs or claws.

- Slightly curved hind feet too, but this time worked to look like swords.

- From the armrests that are connected to the armchair, but which can be represented in different forms, we find the animal lexical field with sometimes heads of lion, dolphins or swans that are carved. It is also possible to discern sphinx heads that emphasize and recall this Egyptian orientation or even cariatids.

- At the back, it remains quite simple, rectangular in shape, flat and without any additional large additions, there will be a fabric tip to allow to dress everything while remaining discreet and subtle, in line with the fabric of the seat.

The ensemble thus gives a general visual that gives the appearance of a uniform block of a color, and it is by getting closer and observing the different details that are worked that we see that these decorations remain in the minority: they aim to sublimate certain details of the armchair and not to cover it with ornaments or artifices. This remains above all a seat that is mostly raw which then adds to its authenticity. The apparent and majority wood as well as the hair of the fabric that go hand in hand with this idea.

In short, beware of all types of advertising on any social network that would sell you a copy of reality, favor official sites. The material used for manufacturing is also important, you may find some problems in your interior.

The greatest cabinetmakers of the time

When we talk about the Empire armchairs, we necessarily approach the cabinetmaker brothers Georges Jacob Jr. and François Honoré, creators of seats such as the famous "inverted lyre" seats.

François Honoré took the name Desmalter shortly after to death of his brother in 1803 which allowed us to find him in history thanks to his stamp. It was with his son Jacob Desmalter that they were able to found the Empire armchairs. His son, who succeeded in seducing Napoleon I by his production style, was also recommended by the painter David who allowed him to quickly win the admiration of the king at the Court. This artist is particularly inspired by ancient Greece, which is why it is possible to sometimes spot certain creations with these characteristic features. The aim is first of all to highlight the practicality of the chairs while giving them a certain splendor.

Pierre-Benoît Marcion is also a cabinetmaker who worked with Jacob. He was known not only for his talent, but also for the quality of these works. This also gave him the opportunity to win the admiration of Napoleon I who charged him with furnishing works especially for the Trianon and the palaces of Fontainebleau and Compiègne. Marcion's work was more oriented around dressers and secretaries, but what made one of his greatest assets remains in his precision of these works around gilded sculptures and bronzes. He was known for being a cabinetmaker who brought out the quality of the material associated with the perfect dimensions of his work.

Pierre-Antoine Bellanger was the first supplier of Empire furniture during the reign of Napoleon I. He was then commissioned to supply Napoleon's various secondary properties with furniture. He has also worked on the castles of Meudon, Compiègne or Laeken or Saint-Cloud. His biggest project representing the work he was able to do in the Tuileries Palace. Bellanger's work was of such high quality that when the Restoration style gave way to the Empire style, he was granted the title of patented supplier in 1917. The various members of his family such as his son, Louis-Alexandre with whom he joined or his brother Louis-François or his nephew Alexandre were all cabinetmakers recognized for their work in most of the first part of the 19th century.

What is the price of an Empire armchair?

It is important to remember that the acquisition of an Empire armchair can take two different forms:

The contemporary armchairs that are inspired by the period criteria to regain an old-world look. In general, these furniture are based on a range ranging from 800 to 1400 for some models. You can also find in these prices armchairs that faithfully respect the criteria that were of order of the time of Napoleon I, but also to have models that sometimes vary. Contemporary cabinetmakers have graded the visual foundation of the chair, but may also have taken initiatives, so pay attention to all the criteria observed above.

For collectors, you can buy these armchairs from auction sites. In this case, the armchairs are authentic and could only benefit from partial or complete restoration. For lovers of antiques, this option appears to be the most acceptable, but prices are sometimes higher than in a conventional sale.

To take into account the prices made in auction, it must be understood that these armchairs may have been partially or totally renovated. This results in price variations that are very large. It is, in fact, possible to find a pair of two Empire chairs that appear as new sold for a price of 2240 euros at an auction. Their condition is linked to a worked renovation that causes the chair to lose value.

The most expensive armchairs are the signed models, so Jacob's Empire armchairs can sell for more than thousands of euros, while an unsigned armchair will sell for 1000 euros.

However, there is also a sale of a set of 4 Empire chairs that were painted white and photographed for a total of $12,500 on October 14. In this sale, the gilding is made of gold which adds a certain value, but by looking at the unit price of each chair, they still stay at a price of $3,125 per armchairs.

The demand for empire armchairs is quite variable with customers looking for authenticity and others the renovated style that creates this buying duality.

In most cases, these antiques are delivered directly to the buyer by the seller. The chair is packaged, protected and delivered to the home after signing to ensure the sale. The delivery driver also provides protection until the reception. The order of the product is made under different options depending on the payment: at the time of the arrival of the vehicle, after a period of a few days or at the time of paying, in advance.