A baroque mirror in gold 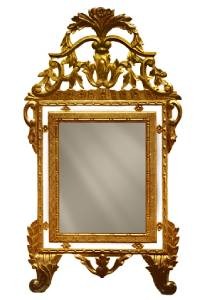 Baroque style mirrors are part of what can be called timeless. Despite the fact that it has been almost half a millennium since we saw the appearance of this style of mirrors, we can still find them in countless establishments, whether contemporary or not.

The Baroque mirror made its first appearance in Italy around the early 1,600s. Since then, almost all of Europe has adopted this style and it continues over time. This type of mirror was still created in a time when we wanted to avoid classicism. This may explain its relatively unusual appearance.

What is gilded wood?

Gilded wood is the final product that is obtained after gilding wood in the rules of the art. Gilding on wood is a technique practiced for ages by great craftsmen. Today, it is mainly used to restore works of art, but also certain types of furniture such as the baroque mirror precisely. The technique of gilding on wood consists of covering the frame of the mirror with gold leaf. This therefore concerns mirrors whose support is neither metal nor rockery. There are two ways to brown wood. It is therefore possible to proceed to the gilding with water, also called gilding with tempera, or gilding with mixing.

In the 1,700s, the Baroque style was all the rage, even among sovereigns such as Louis XV. Gilding on wood was still very much practiced, because an authentic baroque mirror must be made of gilded wood. This technique, which has become widespread in Europe, comes from the Egyptians. They were the first to gild wood for decorative purposes. Gold leaf was then used in various ways throughout time. The more craftsmen practicing gilding became, the more tools and techniques there were. With evolution, gilding on wood lost some of its popularity, especially from the French Revolution. It was perceived as a sign of monarchy. This is why the technique has been gradually abandoned, but it is not forgotten.

How is gilding applied to the frame of a mirror?

With the advent of industrialization, gilders on wood gradually lost their prestige. However, the techniques used were elaborated and the results more than satisfactory. It was an art that was not within the reach of the first comer. Gilding on wood required patience, precision, but above all an almost innate know-how that was found only among professionals in the field. Today, baroque style mirrors made of gilded wood can look vintage. Nevertheless, it is no less beautiful although they come from the old days.

Before moving on to the actual gilding of the wood, there are several steps to follow. First of all, we proceed to the degreasing. This step consists of removing any traces of fat on the object to be gilded. Then it is necessary to pass glue on the furniture, it is the gluing. Priming, which comes right after, consists of applying different layers of glue to thicken the wood well. The number of layers varies depending on the use of the object. Then comes sanding or softening. The previous step impasto the furniture. It is therefore necessary to soften the latter. The fifth step is the reparure, which serves to take up the sculptures impasto by the priming. Then we go to the gluing yellow. It is used to plug the gaps left by the gold leaves that will not perfectly fit the curvatures and hollows. Subsequently, there is the plate that is applied to the protruding parts.

Then there is dogning. This step consists of polishing the plate. It is only in the ninth stage that we move on to the laying of the gold leaf. Then comes the browning, this is where the gilder rubs the dry gilding to obtain a shiny wood. Matting is a mixture of water and rabbit skin glue. This mixture is applied to the sculpture backgrounds. We could stop there, but there are two non-mandatory steps that follow this one. The patina so as not to have a too new rendering and the yellow thickness for the contour of some frames.

Louis XVI mirrors and Baroque style mirrors are often assimilated and confused. It is true that there may not be transcendent differences, but it is still important to make a difference if you want to get it right.

A Louis XVI mirror is, most of the time, mural. This makes the space in the room optimized. Already, because the room appears larger thanks to the large mirror, but in addition because the mirror does not take, to say enough, any place. If it is placed in a place in the house where sunlight can reach it, the room where it is located will be all the brighter and brighter.

A baroque style mirror, on the other hand, looks more imposing. In a space, it seems to take up more space, even if it hangs on the wall. The mirror appears larger without disturbing. If it is made of gilded wood, it reflects very well the light inside the room where it is located. For the big lovers of interior decoration, this type of mirror is perfect to embellish a house, while bringing a little vintage touch. The size and shape of the mirror play a major role in the value it adds to a room.

At first glance, it seems that there are no big differences between the two mirror styles. However, for connoisseurs, there is probably a whole world that separates them. Each piece of furniture can bring a plus to a room. It is enough to know how to choose which one is the best fit. It also depends on the inspiration of the creator. The design of a piece of furniture matters almost as much as its usefulness when it comes to making a choice for interior design. Know that not everyone has the same tastes, those who prefer the modern will do the mirror comparison new baroque will be supplied in department stores, while lovers of old will buy from an antique dealer. Dealing with a minimalist is one thing, dealing with a color fan is another.

What is the price of a baroque wooden mirror?

The price of a baroque gilded wooden mirror can vary depending on many factors, depending on whether it is old, recent, restored, large, small, and much more. For the smallest, recent and simplistic, it is possible to find baroque style mirrors costing just over 200 €. The larger and older it is, the more expensive it is. Acquiring an antique mirror may seem like a good idea, but pay attention to the price and condition of the gilding, indeed if the gilding is to be restored, involving a restorer of gold gilded wood can be very expensive.

Nowadays, one can still find old mirrors that cost more than €5,000. This is especially the case if it is a baroque mirror made of gilded wood. Nothing like the web if you are looking for information on this style of mirror. It's hard to make a mistake, no matter what your preference is.