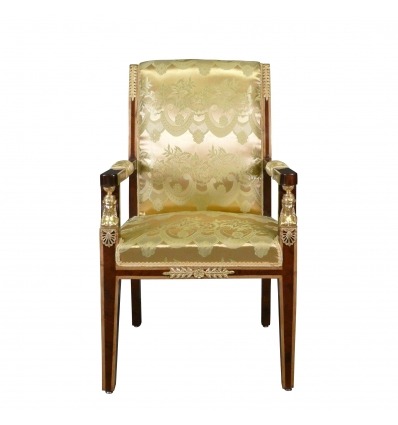 The Empire armchair satin golden fabric is a model of furnishing combining elegance, aesthetics and nobility thanks to its materials and its ornamentation.

Made mainly with a mahogany wood frame enhanced by a marquetry of mahogany and Amboine magnifying glass, ornamented with gilded bronze, this beautiful Empire armchair with a golden satin fabric benefits from a traditional assembly by tenons and mortises.

Empire armchairs of a timeless reputation

Appeared for the first time at the time of Napoleon I in the eighteenth century, later resumed under the reign of Napoleon III with the chair of the Second Empire, this seat model is comfortable and elegant. It is characterized by its heavy, imposing appearance, its massive material, as well as its bronze ornaments. Indeed, Empire armchair satin golden fabric is made with a mahogany frame, this type of wood stamps the era of empires since the cabinetmakers working at this period as André-Charles Boulle (1642-1732), cabinetmaker and marquetry, used it. This Napoleon III armchair is adorned with magnificent gilded bronze sculptures, inspired by the Egyptian decorative arts.

By choosing an empire seat, you will immediately invite in your interior decoration the time of the aristocracy, you will go back to the era of the French bourgeoisie. The Empire armchair adapts well to the original and authentic decoration style. He will make youto the time of the empires while sublimating your interior. It benefits from rounded armrests providing you with optimal comfort once you sit down. Its rectangular and flat back as well as its seat are filled with foam. They are covered with elegant shiny golden fabric. As part of the five types of Napoleon I seats, this gooseneck chair has previous encircling claws and ended with claws or hooves and hind legs ending in saber.