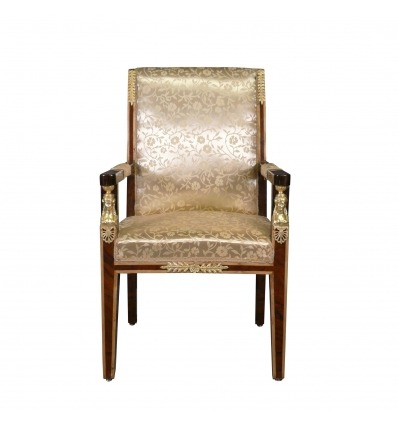 The Empire armchair in mahogany magnifier has a mahogany frame with a mahogany and Amboine magnifying marquetry with a shiny satin fabric, for a chic rendering. 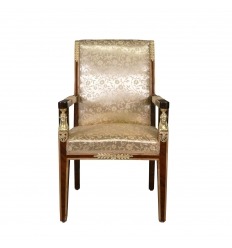 The Empire armchair in mahogany magnifier has a mahogany frame with a mahogany and Amboine magnifying marquetry with a shiny satin fabric, for a chic rendering.

Featuring a mahogany structure highlighted by a marquetry of mahogany and Amboine magnifying glass, dressed with fine engravings of gilded bronzes, this sumptuous Empire armchair in mahogany magnifying glass benefits from assemblies made in a traditional way by tenons and mortises, an excellent compromise between aesthetics and solidity. The seat and backrest are lined with synthetic foams, supported by elastic straps to make the seat feel comfortable and then covered with satin fabric.

The Empire armchair with mahogany loupe appeared for the first time with the Napoleon I collections such as gondola armchairs, gooseneck armchairs, Etruscan armchairs and Napoleon I curule armchairs. Characterized by the triumph of diversity and eclecticism, this reproduction belongs to the seats of the Second Empire style, also known as Napoleon III style. This style was created in France under the Second Empire, under the ardor of the Emperor Napoleon III. It is designed with a taste of luxury and pomp, and favors opulence and polychrome. But among the major features of this style, there is still the concern for comfort.

Marking the era of Empires, mahogany is the main material of manufacture of this collection of very original furniture. heThis is also one of the materials used by cabinetmakers of the time since the early fourteenth century, as André-Charles Boulle (1642-1732), cabinetmaker and marqueteur from generation to generation. Thus, with a mahogany Empire armchair, you will go back to the time of the French bourgeoisie. This seat model is adorned with fine gilt bronzes engraved with floral motifs on the sides of the armrests and the bottom of the frame, which will be able to adapt to the decoration of your home. Authentic, original and elegant, it can be installed perfectly in the living room, in the office or the living room to surprise the guests.