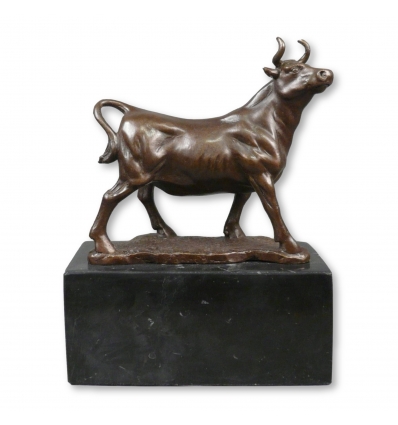 Bronze statue "The bull" after Isidore Bonheur, on a marble base.

Bronze statue "The bull" after Isidore Bonheur , on a marble base.

He is the second son behind Auguste Bonheur and the third child, Raymond Bonheur (? -1849), painter and Sophie Marquis (1797-1828). He is one year old when his mother dies. His father remarried and will have in 1830 a daughter of his new wife: Juliette Bonheur who will become a painter and married in 1852, the art founder François Auguste Hippolyte Peyrol (1856-1929). Member of an artist family whose most famous representative is the painter Rosa Bonheur, the eldest of the siblings. Isidore makes his first artistic apprenticeship with his father Raymond and his older sister Rosa. In 1849 he entered the School of Fine Arts in Paris. He first tried painting and presented at the Salon of 1848 an African Cavalier attacked by a lioness, then turned more specifically to sculpture, including naturalistic subjects staging animals.

He presents in 1850 a group, Combat of bulls which is noticed. He won several medals in the Salons and a gold medal at the 1889 World's Fair.

The bronze statues are made using the lost wax method, and are 100% bronze .