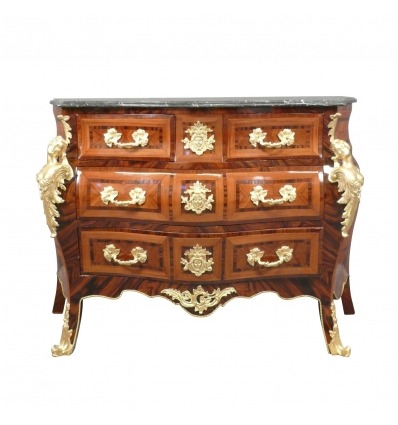 Tomb-shaped, curved on the façade and sides, it opens with four drawers decorated with gilded bronzes. 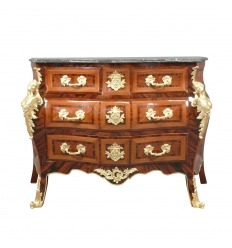 Tomb-shaped, curved on the façade and sides, it opens with four drawers decorated with gilded bronzes.

Louis XV chest of drawers in rosewood marquetry, affixed to a mahogany structure. The varnish benefited from manual application to the pad.

The frame is decorated with gilded bronzes topped by a white veined black marble top, with a molded edge.

Four drawers mounted with dovetails, two of which are at the level of the belt subdivided.

What is the Louis XV tomb chest of drawers?

This Regency furniture called "en tombeau" or "chest of drawers tomb" appeared in the 18th century. It is inspired by ancient tombs and sarcophagi. The furniture of this style is imposing, curved all sides, it has three rows of drawers (the belt row often subdivided into two or three drawers as on our model) and rests on short legs.

This style of Louis XV storage cabinet is characterized by its all-sided curve, it will be produced until the years 1755, end of the Louis XV style. It is a furniture loaded in its décor, and by its trim of gilded bronzes, it is usually topped by marble. It is distinguished by its shape and marquetry which is often diamond-shaped. It can then be in rosewood marquetry, rosewood, amaranth. This use of different species makes it possible to play on the contrasts by the colors of the wood.

But a tomb chest of drawers can be made of natural wood, especially the Bordeaux dressers made of mahogany. In the same style, we can mention the Toulouse, Lyon and Provençal walnut dressers.

Its ornamentation makes it a piece of furniture that inspires opulence, always gilded, they take the form of foliage, but also characters, like the heads of women.

When you buy a Louis XV chest of drawers, you will also get elegance and durability that is difficult to find in other types of furniture. They are strong and robust and can be used to lay their marble tops the heaviest objects. You won't regret your decision to buy a tomb dresser, as they are fantastic and will keep your bedroom amazing for many years.

A Louis XV chest of drawers is an object that will certainly be passed down through generations of families, making it a timeless art object.