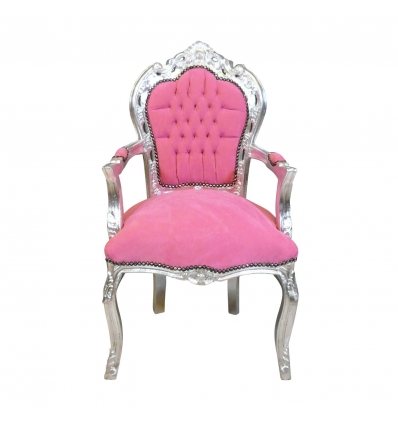 Luxurious and comfortable, this baroque pink and silver armchair has a frame in solid carved beech and silver, as well as an upholstered backrest of an elegant velvet fabric. 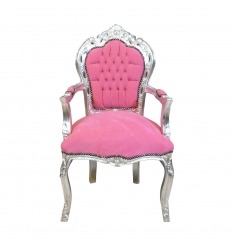 Luxurious and comfortable, this baroque pink and silver armchair has a frame in solid carved beech and silver, as well as an upholstered backrest of an elegant velvet fabric.

Featuring a solid beech structure, finely hand carved and silver, with a velvet fabric cover, stretched by nails upholsterer, the baroque armchair pink and silver boasts traditional joints by tenons, ankles and mortises, a excellent compromise between aesthetics and robustness. The backrest is padded and the seat soft thanks to padding with foam.

The luxurious Rococo seat for an exemplary decoration

Appeared in the eighteenth century, Rococo style is a European artistic movement particularly concerning architecture, but also painting, decorative arts, music, literature and especially furnishings. From 1730 to 1770, he recognized a great rise to generate a style of great magnificence, visible especially in churches, but also in the palace, museum ... Jean-Antoine Watteau (1684-1721), François Boucher ( 1703-1770) are among the representative artists of this Baroque art. Being the reproduction of the same old models, like those created by Charles Cressent, a master cabinetmaker of the time, the baroque armchair rose and silver inspires the concept of ostentatious art "barocco", from Rome (Italy) meaning a "pearl" rare ".

A seat of the Versailles collection chic and practical

The baroque armchair was usedpreviously used to create frescoes in important buildings such as the Ettal Abbey, the Cathedral of the Incarnation of Granada, or also the Scönbrunn Castle in Vienna. Many artists still draw their ideas for their creation, including the pink and silver Baroque armchair that has adopted the different patterns of style. In the same collection, there is also the sofa, the loveseat, the couch, the chaise ... Some of them are carved from a Gothic decoration, while keeping the classic aspects of the furniture in itself. This seat of the King of France is equipped with two armrests and upholstered with old nails upholsterer. The upholstery and the structure make the armchair at once very decorative, solid and very comfortable.