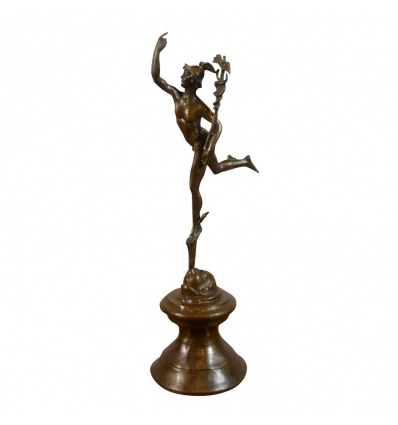 Small reproduction of the bronze statue of John of Bologna - Height: 22,5 cm

Historic bronze statue of Mercury or Hermes flying made with lost wax.

Giambologna (in Italian Giovanni Bologna), born John of Bologna or Jehan de Boulogne is a Mannerist sculptor of Flemish origin born in Douai in 1529 and died in Florence on August 14, 1608.The bronze sculpture of John of Bologna was made between 1564 and 1580. The original statue is at Bargello, Florence.

In Greek mythology, Hermes is one of the deities of Olympus. He is the god of commerce, the guardian of roads and crossroads, travelers, thieves, who guides the heroes, luck, the driver of souls in the underworld, the messenger of the gods (especially Zeus) and the inventor of weights and measures. It corresponds to the Mercury of the Romans, to Sarmis or Armis among the Dacians, Weapons to the Scythians, Taaut to the Phoenicians, Thoth to Egypt and Sarruma to Anatolia.

Bronze sculpture - The child and the baseball

Bronze statue of a naked woman