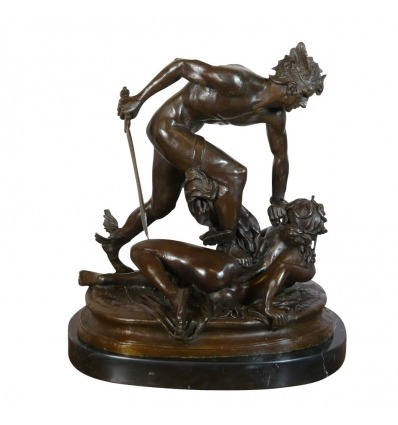 Perseus , king of Argos, is one of the greatest Greek heroes. Perseus is the son of Danae, daughter of the king of Argos Acrisios. The latter, warned by an oracle that his grandson would kill him, locks up his daughter in a brazen tower, which does not prevent Zeus from seducing her in the form of a shower of gold. Perseus is thus born in secret. Revealed to his grandfather by his cries, he is locked in a chest with his mother and thrown into the waves, which carry him to the island of Seriphos. Both are collected by a fisherman, who raises the boy as his son. When he became an adult, he was entrusted by Polydectes, the king of the island, with the task of killing the Gorgon Medusa, whose hair is made of snakes and whose eyes petrify those he reaches. Winner thanks to the magic weapons given by Hermes and Athena, Perseus passes on the way of the return by Ethiopia where he meets the princess Andromeda, which must be delivered to a sea monster following the imprudent words of his mother Cassiopeia. Perseus delivers her thanks to her magical sword and marries her. Back to Seriphos, he takes revenge on Polydectes, who tried to rape his mother Danae. He then rejoins his homeland, Argos, which Crisios has fled for fear of the oracle to take refuge in Larissa. The king of this city organizes funeral gameswhich Perseus takes part. By throwing the disc, he accidentally kills Acrisios, who attends the trials as a spectator. For the sake of his late grandfather, Perseus exchanges his royalty of Argos against that of Tiryns. The legend of Perseus, especially the episodes of Medusa and Andromeda, had a great fortune after Antiquity. It is possible that it has influenced the Christian legends of saints dragon slayers, like that of Saint George.

The decapitation of Medusa by Perseus does not appear in Homer, but it appears from Hesiod's Theogony: Medusa, daughter of Keto and Phorcys, is the only one of the three Gorgons to be mortal and to be seduced by Poseidon; she is decapitated by Perseus on the shores of Ocean, and from her blood are born the winged horse Pegasus and Chrysaor with the golden sword. The Shield of Heracles shows Perseus equipped with the helmet of Hades, pursued by the Gorgons after beheading Medusa, whose head is enclosed in a bag with gold fringes that he wears on his back.