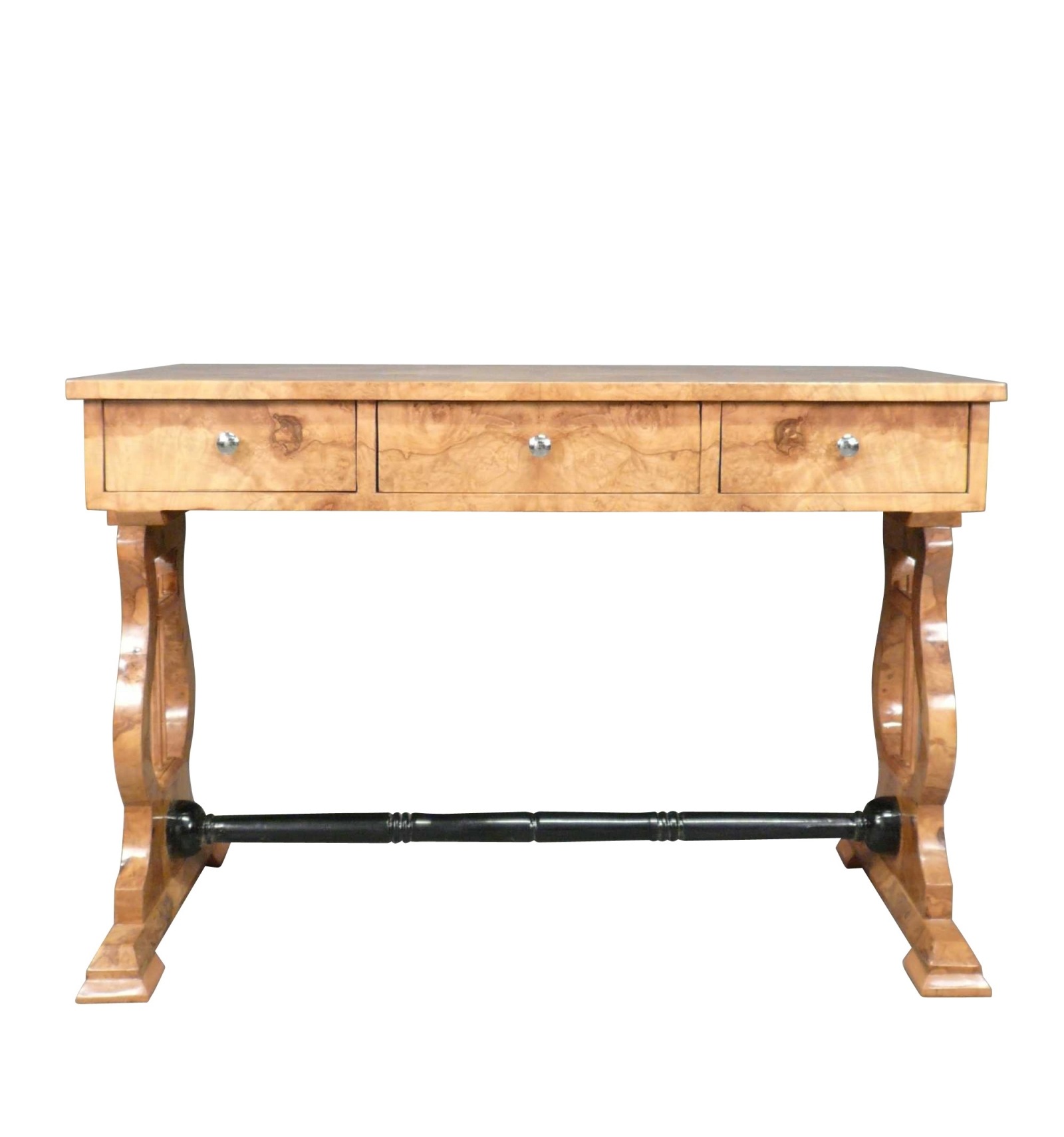 A Louis XVIII office is actually a piece of furniture created under Louis XVIII that ended around 1715 when he died. This type of furnishing oscillates between the Louis XV style and the Charles X style.

At the time of Louis XVIII's reign, the furniture was characterized by a style called The Restoration style. For financial reasons, King Louis XVIII, who governed with his brother Charles X, could not afford large budgets, which characterizes the style of this antique piece of furniture. The style of the furniture evolved in 1820 while keeping the shape straight, but with the use of lighter wood such as mahogany, maple, ash magnifying glass or lemon tree ink.

The different forms of offices

Choosing an old office is like giving life back to the furniture. It values the great change over the different styles that have followed each other through the ages. If at the very beginning the style of antique furniture was characterized by a very massive side, with evolution, the work table becomes thinner and is enriched with luxurious decorations such as veneer and marquetry, with the use of more prestigious wood...

Today this style of furnishing is appreciated for its visual, in fact the bronze ornaments with the designs in marquetry are fashionable, no modern furniture can compete.

Different forms of offices are becoming more numerous. Currently, the beauty of period furniture finds its place in any interior style. If previously prestigious furniture was reserved for royal apartments, such as the dresser, table or office, today they are accessible to the general public. The various furniture from the louis XVIII era are made of mahogany, walnut, rosewood...

Furniture signed by cabinetmakers for a stylized brand

The flat desk symbolizes the renewal of 18th century decorative art. This piece of furniture has a large rectangular flat table with a drawer belt. It has become the table to work par excellence of representation. Typically, the flat desk represents cabinetry, which means it is made from the hands of a master cabinetmaker or workshops allowed to work wood in marquetry or ebony or mahogany veneer. This type of furniture is rarely made with solid wood.

Originally, this flat furniture was designed for men, but with evolution, more and more models created for women have emerged. Also known as the "writing table," the flat desk is decorated with finely gilded and chiseled bronze. The 18th-century office is exceptionally of good quality, which, somehow, gives it all its comfort in writing.

The secretary is a piece of furniture derived from the writing board, which can serve as both a writing table, but also in a sort of cabinet or dresser. The upper part of this piece of furniture is formed by a large drawer, and at the time, a marble tablet. In the 18th century, the art of the secretary's making took a completely new turn thanks to the talent of the cabinetmakers of the time who began to make new forms of secretary with great richness in decoration.

The right secretary, while being an office and storage furniture, allows for a huge saving of space. This piece of furniture easily finds its place in any room of the house because of its very reasonable dimensions, but also because of the beauty of the finish. Underneath the shot is a plan on which you can write. The mahogany drawers are useful for laying documents or small accessories. The secretary has ceased to be a piece of elegance to become a working piece of furniture under the First Empire.

The cylinder desk appeared in furniture around 1750. It is a piece of furniture that in the foreground features a marble work table, and in the second-th across the storage drawers in the background, a retractable shelf lined with leather, a nest of shelves and hiding places, which are covered by a cylinder-shaped slatted downright in the quarter-circle. This cylinder façade slides to trap the office and keep your precious records.

The cylinder desk or cylinder secretary is usually made with a mahogany veneer or marquetry. The cylinder secretary was introduced in France in the first half of the 18th century. During the reign of Louis XV, the cylinder office had come in different forms to meet the various demands of the clientele, specifically male who were very demanding regarding the comfort and luxury of the furniture.

The Louis XV office is arguably one of the most popular furniture in French history. Made in the 1760s, the Louis XV office, also known as the "King's Office," was decorated during the reign of Louis XV. It was made by two of the King's cabinetmakers. Following the death of the first, Jean-François Oeben, the second cabinetmaker Jean-Henri Riesener took over, who is none other than Jean-François Oeben's cabinetmaker. Thus, the office of Louis XV has become one of the most famous furniture in France.

Particularly appreciated for its writing comfort, it retains all the quality of Louis XV's popular furniture. The talent and refinement of the cabinetmakers during the reign of the king of the time can be found in these works. With the evolution, new Louis XV desktop models are being manufactured, intended for ladies with a smaller size. In this same collection, one can also meet the office back of a donkey, the Happiness of the Day and the slope office.

The Louis XVI office style is located between 1750 and 1795. It is characterized by contoured lines, inspired by the Louis XV style by its straight features and a very light and uncluttered ornamentation. The manufacture of furniture from the Louis XVI era was easily recognizable thanks to the use of mahogany: bramble, tracked, speckled or moist. The finish of the wood is made with varnish or waxed, solid for the studs and veneer for large areas. There is also a lot of light painted or lase wood.

The ornamentation of the furniture is very symmetrical, with mouldings inspired by antique style, but with great finesse and elegance. The motifs of the Louis XVI office are inspired by baskets of wicker, rosettes, pine cones, garlands of flowers... Bronze is still used, but in a more subtle and fine way, usually tinted in gold. The feet are straight and especially light in different forms. Each foot ends with a hoof in a top or eagle's greenhouse, and is attached to the furniture by a connecting cube decorated with rosettes.

How do you recognize an 18th-century office?

The 18th century furniture is defined by restoration furnishings. The use of mahogany in veneer or in solid remains the main way to create furniture. The 18th-century office was then recognized by its wood, clear and sometimes speckled such as orange, lemon, tuya...

It is different from the Louis Philippe tiered office which was made of solid cherry.

Each foot of Louis Philippe-style furniture is either straight or arched on the front, in X, claw, lyre-shaped. In general, the 18th-century office has a right-hand knock with the underside closed with a two-front door. The desk can also be in the back of a donkey or a cylinder, which sometimes includes a library and a rag maker. The ornamentation is made of either light wood or dark wood.