> Blog > sculpture > The statue of justice and its attributes

The statue of justice and its attributes 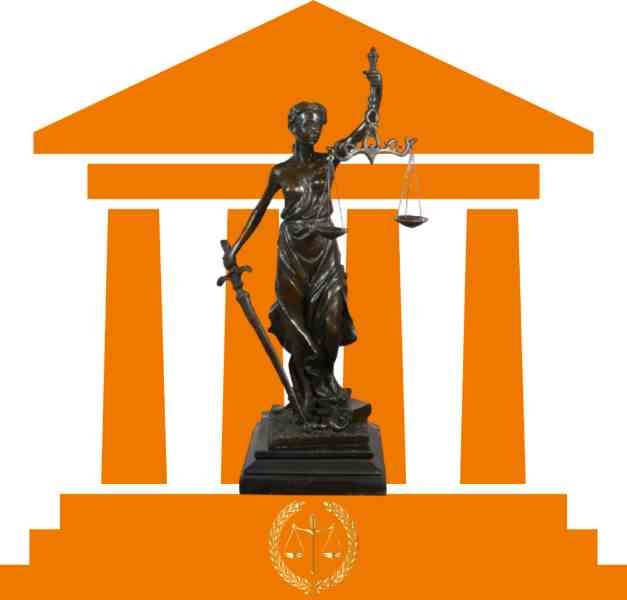 In Greek, the word Themis referred to divine law. These rules of conduct have long been established by custom. The term was not generally used to describe the laws of the human decree, but its conception has changed over time. Today, it is symbolized by Lady Justice, who represents the law and the constitution of human rights.

Themis and its attributes

Themis was the titanic goddess of divine law and order. These are the traditional rules of conduct established for the first time by the gods. She was also a prophetic goddess. She presided over the oldest oracles, including that of Delphi. Indeed, in this role, she represented the divine voice that first instructed humanity in the laws of justice.

Themis is closely related to Demeter Thesmophoros. Indeed, the six children of Themis who are the Horai, representing the seasons and the Moirai, as well as fate, bring death, reflect the two functions of Persephone, the daughter of Demeter. Themis was also identified with Gaia in particular in the role of the earth's oraular voice.

She was worshipped as a goddess in Athens. She was also credited with wisdom, foresight and prophecy. The name of his son, Prometheus, means "foresight." She knew even unknown secrets of Zeus. Themis was the protector of the oppressed and a promoter of hospitality.

Justice was one of the virtues celebrated by Emperor Augustus in his Virtuoso Clipeus and a temple of Iustitia was established in Rome on January 8, 13 BC by Emperor Tiberius. Emperor Vespasian engraved coins with the image of the goddess sitting on a throne called Justitia Augusta. Many emperors after him used the image of the goddess to proclaim themselves protectors of justice.

As time passes, especially with the adoption of Christianity by Rome, the goddess Justicia becomes more an iconic representation of justice than a deity. No incense and no sacrifice was offered to the goddess. On the other hand, it was swore truth and impartiality during the judging ceremonies.

The people worshipped the goddess for the attributes she represents. These are:

The Law and Order

The "law and order" that Themis represents reflects the sense of natural order and what was appropriate, especially with regard to the family or community. These customs were perceived as of natural origin, although they are now considered cultural or social constructs. It was these representations that inspired the illustrious character Chief Justice John Marshall.

The representation of Themis for the Greeks, Justicia for the Romans or Lady Justice for the Americans, blindfolded is more frequent in the 16th century and in modern times. Blindness represents fairness and impartiality as well as the gift of prophecy.

Themis followed his mother Gaia in the occupation of the Oracle in Delphi. In some traditions, Themis is the origin of the Oracle. The divinatory powers and wisdom given to the oracle of Delphi, an important figure in ancient Greece, come from Themis and were passed on to Apollo.

Themis shared a temple in Rhamnus with Nemesis because those who ignore divine or natural laws must face punishment and punishment. Nemesis is the goddess of divine vengeance against those who committed the pride, arrogance, excessive pride and defiance of Olympus by rejecting the law as well as order.

What are the symbols of themis' justice?

Universally, the symbols representing the goddess of justice are as follows.

The balance of justice represents the balance of the individual in relation to the needs of society and the right balance between the interests of one person and those of another. The personification of justice as a balance goes back to the Egyptian goddess of justice, Maat, who defended truth and fairness.

The scale represents the weighing of evidence and the scales have no basis to mean that the evidence must be maintained in itself.

The headband represents impartiality, the ideal that justice should be applied without regard to wealth, power, or other statutes. The headband, a symbol of blind justice, represents equality, knowing no difference between the parties involved. Representations of the Lady of Justice in the Western tradition since the 16th century show that sometimes she wears a headband, which is more widespread in Europe.

The sword represented authority in ancient times and conveys the idea that justice can be swift and definitive. The sword of justice is the active force, a symbol of power, protection, authority, vigilance and power. This double-edged sword in the left hand of Justice recognizes the power of Reason and Justice, which can be exercised for or against any party. It recalls the need for real punishment, the power of the law and, ultimately, power over life and death.

The Greco-Roman garment symbolizes the status of the philosophical attitude that embodies justice by revealing the knee. The knee is a joint that symbolizes justice and righteousness. Indeed, it is with the help of this articulation that we balance our posture and stand upright. It is in this aspect that Greco-Romans believe that letting the knee appear is a sign of justice and fairness. It was during the renaissance that this practice resurfaced. Also, in order to punish us for breaking a rule, we always put a person on one knee.

The Tables of the Law

Tables of the Law are often replaced by a parchment. Indeed, because of the Christianization of cultures, the parchment was replaced by the table of the Ten Commandments. This practice has become commonplace among renaissance artists inspired by writers like Ovid. Later, some sculptors engraved human rights there. The table represents the material law that governs every individual in human society.

The Hand of Justice

Some illustrators imagine justice holding a scepter with a hand at the end. This image is particularly inspired by ancient Egypt where sarcophagi of the Pharaohs can be seen holding a seal and a plague. These two accessories represent both his high authority, but also a sign of impartial and divine judgment. In the case of the statue of justice, his hand refers to the same representations. Indeed, this scepter bequeathed and carried by the kings of France declares their high authority, for the monarch is considered a representative of God on earth.

The sculptures and sculptors of Themis

Although ancient Greece has many illustrious sculptors such as Phidias or Kallikrates, few of them have been able to represent the goddess Themis. Indeed, in their time, justice belonged to the god protector of the region. It is the goddess Athena, representing war and democracy, who presides over decision-making. At the height of democracy, it is the people and the Oracle of Delphi who make political and judicial decisions.

It was during the Enlightenment and the birth of the first constitution by Chief Justice John Marshall that the sculptors were inspired by the goddess. Courts and courthouses had up-to-date representations of the goddess Justicia such as illustrations, statues and mosaics.

In Italy Roman statues from the goddess of justice are visible in many cities, you can see the statue of this goddess in many countries of the world, whether in Naples in Italy or in Dublin in the famous castle built in 1204 by Meiler Fitzhenry on the orders of King John of England.

Statue of the goddess of justice in Dublin, image Pixabay. 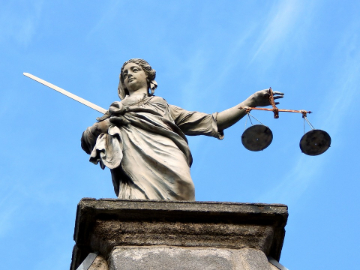 During this period, France was full of famous sculptors such as Jean Louis Jaley, a pupil of Pierre Cartellier. There is also Francisque Joseph Duret, son and pupil of François-Joseph Duret who carved the Place de la Bourse. On the left corner of the main façade of the Stock Exchange, "Consular Justice," carved in 1851, is made of stone. François Jouffroy, a sculptor from Dijon who became a professor of sculpture in Paris at the School of Fine Arts, also counts.

Among them is Jean-Antoine Houdon. The statue of Themis is a sculpture that stands on the roundabout of the same name, in Cherbourg-Octeville, the delegated commune of Cherbourg-en-Cotentin. This statue, carved in stone around 1810 by Jean-Antoine Houdon, is in place of the bourbon palace and is entitled : "The Law".

The first known representation of Blind Justice is the 1543 statue of Hans Gieng on the Gerechtigkeitsbrunnen (Fontaine of Justice) in Bern.

In modern times, there are various statues of justice in important places and places such as the place of justice in Verdun, between the convent of Grand Carmes and the Agard Passage, in New Zealand, Hong Kong or America.

The statue Themis goddess of justice in bronze at HTdeco 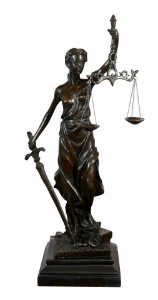 This statue of Themis made entirely of bronze has all the main representations of the goddess.

The sculpture was made using the "lost wax" technique, an ancestral technique that sublimates the statue with the details. This method of production consists of making a wax sculpture that then makes it possible to make a clay mold (today often replaced with refractory cement) which after the casting of the bronze is broken to reveal the figurine. The statue is then chiseled and patinated.

Thanks to its imposing nature, it allows us to remember the virtues of justice and what the profession represents. This statuette is available for purchase on htdeco.fr.