The imitation column or marble effect 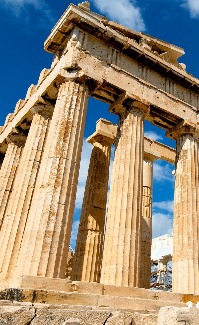 From the times of the Renaissance and the Middle Ages to the present day, the columns are certainly one of the timeless structures that have crossed the centuries without losing their attractions or going out of fashion.

An almost unavoidable element of support for prestigious period buildings, the column remains today a very popular decorative piece, and even has become an indispensable part of contemporary daily life.

Ancient Greek and Roman columns and their imitations

Originally, the column of antiquity served as a support piece or shoal for the most prestigious constructions of the period. It was in ancient times that the Greeks had invented the different styles of their buildings through the structure and models of their columns. These styles, including Doric, Ionic and Corinthian, had inspired the Greco-Roman builders of the times of the orders that perpetuated them until the Renaissance, then throughout the following centuries by bringing innovations relating to the multiple traditions.

If the first Greek temples were built of wood, they soon took on disproportionate dimensions and heights so that it took solid es to support the whole building. It was at this time that the column appeared. Initially made of stone, the column later coated another material much more robust and resistant when the Greeks had discovered marble. From then on, the marble column is a symbol of prestige, resistance and longevity in the Greco-Roman tradition.

The marble of large quarries comes in different aspects, textures and colors according to the countries where the deposits are located. White, gray and pink with stripes or not are the most dominant.

To the present day, many of the ancient architectural and historical buildings with original marble columns are preserved and restored, such as museums, Greek temples and period churches, castles and mansions, architectural monuments, palaces, burials, sculptures... The same is true of the famous remains and ruins, of which only certain marble columns have been able to withstand centuries, wars, and bad weather.

As marble is an expensive material due to the difficulties surrounding its extraction and transport, the builders of contemporary times have replaced it with other more accessible materials, without departing from the appearance and texture of natural marble. This is how it is increasingly tended to adopt different materials of imitation of marble. The idea is to faithfully reproduce the appearance of the marble column of the styles of the period with reconstituted stone, wood, plaster, among others which are less expensive and easier to engrave. Nevertheless, imitations are obviously less resistant than natural marble and their longevity remains uncertain. 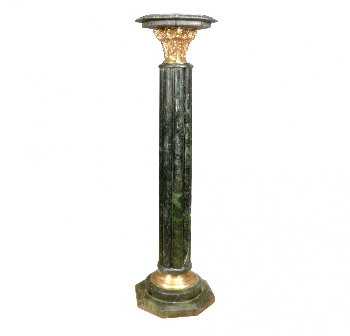 How to recognize a marble imitation column?

Considered in antiquity as a living material, marble was a material whose authenticity had always been controversial because of its many variations and colors easy to reproduce. Since the Renaissance, in fact, painters and artists had undertaken to apply a painting on objects, including columns, in order to create the appearance and appearance of natural marble. This practice is perpetuated, from antiquity to decorative art from the 30s to the present day to the extent that natural marble is inaccessible by means of modest financiers.

Since then, the columns of buildings or the pedestals of objects, built in various materials, are coated and dressed with a particular paint applied to a layer of linseed oil, which gives them the appearance of real marble. It is clear that this false marble is practically difficult to distinguish from the real!

However, it is easy to discern the scythe of the true metamorphic sedimentary rock even if the natural and its imitation are of the same appearance. True marble is characterized by its resistance to friction and violent shocks. It has a noduleous structure and its natural colors are cemented by calcite. The concretized types have white and red spots.

As such, the column imitation pink marble or color is easily recognized by its characteristics of chipped or crumbling under the blows. Its resistance to time or bad weather is also questioned and its texture eventually deteriorates over the years.

The different materials that imitate marble

In addition to painting, certain materials make it possible to faithfully reproduce the appearance of marble, such as terracotta, stone, wood and plaster.

The unstable supply of natural marble and its exorbitant cost led builders to resort to reconstituted stone. It has become more and more popular especially in construction and interior equipment. Quartz stone is usually used in the paving of a patio or courtyard, in kitchen equipment and in the bathroom. It is also used in the coating of floors, walls and countertops...

Perfect imitation of marble, plaster stucco consists of a binder in plaster or greasy lime, such as Venetian or Roman stucco... Plaster stucco is usually used in interior equipment such as ceiling covering, wall, wall decorations. However, this material has brittle characteristics and can break easily under a violent shock. But it faithfully reproduces the appearance of marble especially since it can be painted with various colors.

Wood is a noble and warm natural material, which can be used in various ways until reproducing the effect of sea green marble or white carrara marble. The wood paint applied to the material must give the desired effect. Painted wood is thus an ecological and economical solution to interior design initiatives.

The yellow onyx called backlit is an ideal material to reproduce the marble effect at a lower cost. Its backgrounds of various colors and ribbed veins come from the formation of layers of limestone, characteristic of this natural stone.

The yellow onyx thus presents itself with a matte complexion that can be polished and smoothed to give it shine. It is widely used nowadays by restaurateurs, in shops, hotels and luxury palaces to give the appearance of marble.

What is the price of a marble effect column?

Going back to the marble effect column, the cost varies depending on the material used. While plaster is usually the cheapest, reconstituted stone or yellow onyx can cost more. The cost will also depend on the style adopted as well as the size and shape of the column.

However, as the columns are symbolic objects of bygone eras, their ancient and legendary characters earn them their often exorbitant cost. This is the case of the Corinthian style column in plaster, or gilded wood, or lacquered wood.

In our store you will find a pair of marble columns for a few hundred euros. Reproductions of Napoleon III models or style. These are made with real marble in Egypt, we offer white green or even beige marbles.