The characteristics of art deco furniture 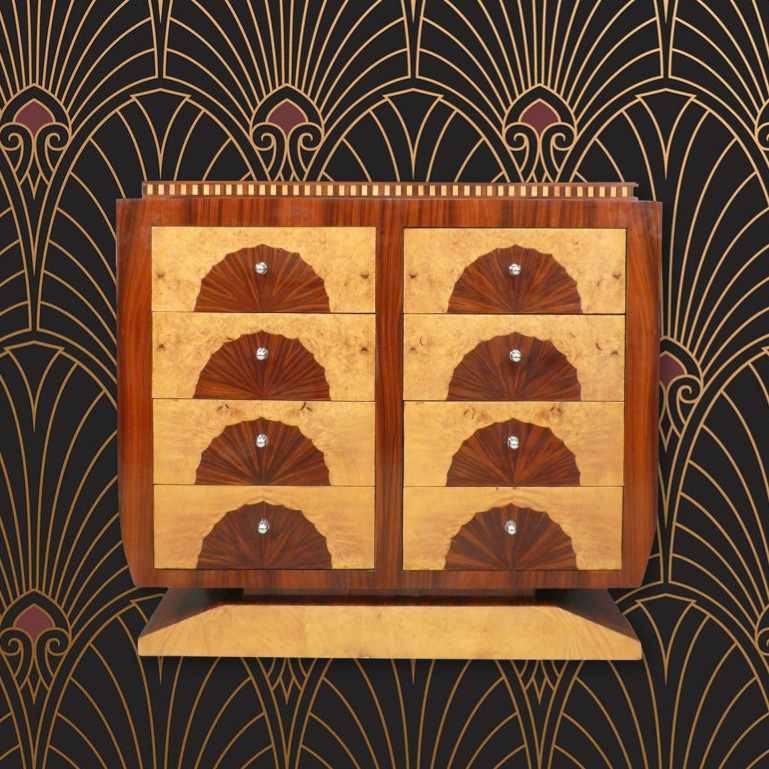 There are different ways right now to decorate the house. One choice is Art Deco. It is an artistic movement that began more than a hundred years ago, but still has as much attraction and class. Discover in this article everything about this style, its characteristic and its origin.

Art Deco was born at the International Exhibition of Modern Decorative and Industrial Arts held in Paris. Also called the art of decoration is a term that was in vogue around the 1900s in France.

It was from the year 1920 that this style flourished in society. But his fame didn't stop there, it evolved in the following years until 1950. Art deco is a way of decorating the interior of a house, including landscaping.

It is a decoration that highlights the colors and patterns. Apply both outside and inside the house. It is a modern movement that plunges into a feminine environment. The use of patterned wallpaper is requested. Whether it's a floral pattern, a geometric pattern or even a spiral pattern.

Question form, the basis is to avoid anything that can lead to a round angle or curves, the opposite of art nouveau. A rule that concerns architecture above all. Also on the construction plan, there is no material to favour, but you just have to turn to concrete during construction.

As for the world of décor, if you're more of a crazy style, that's a good thing. Art Deco is characterized by other artistic movements on the one hand by its style with geometric patterns.

Whether for interior decoration or outdoors, the patterns and lines mark the territory. And on the other hand, he favors geometric lines over the choice of their furniture. So, already prepare your eyes to see a ton of patterns in the house, of course the wall ornament only on the exterior appearance of the house.

The different periods from 1900

Art Deco has undergone a great revolution including several European countries. But this domination that began in 1900, and took off between the 1910s and the 1930s, still persists in society today. The lines are inspired by board or restoration inspiration. Even though the rules changed from the 1925s just before the 1929 crisis.

Modern art went to war with Art Deco. A war that marked the era by being, a crazy year. But this style has marked different areas, as in 1910-1923, where floral motifs stood out. A pattern perceived on the walls as well as on the furniture. From 1923 until 1936, this movement favored the few small details in its features and to mark its style more against the other competitors at the time.

Spreads of art deco around the world

The importance of art deco depends mainly on each country that rubs shoulders with it. In France, for example, it captivated the heart, only for a few years after its appearance. In the USA, this art is a great success, especially in architecture. This art extends to North Africa, which has indeed captivated the hearts of the inhabitants. A colorful art that reflects their daily lives. He pretty much visited countries around the world after the war.

In France, art deco represents two different classes. Rather, art deco was intended to differentiate the well-to-do and middle-class classes. Whether it's about the architecture and the color of the houses. Or when it comes to the décor and furniture of the house, as with the designer Jean Dunand who presented a large number of works of art until the 1930s.

It was originally the overall meaning of Art Deco. After the passage of the world war, the time of the Kingdoms changed. This movement has lost its place in its creative country. Instead, he lifted the sail for the United States, where architects influenced by these straight lines and bright colors created many buildings that are now mythical.

As it is an art, it is not a scribble that lacks meaning. Each piece of the décor represents the charm of art deco. Whether it's wall ornaments with wallpaper or furniture décor with a marquetry made up of inlays of precious wood motifs.

Order, color, geometry are three words that best define the world of Art Deco. The same goes for graphic design. The artist plays on different colors as well as lines to give an art form that inspires elegance. An art that contrasts straight and curved. We even see paintings that represent the image of a woman with elegance and refinement on the paintings.

Artists also sometimes use mother-of-pearl, gray, Snakeskin, gold and silver leaves, crushed egg shell and ivory. Just to give charm to his painting.

But it's not only at the level of the painting, it can also be used for the décor of the house. 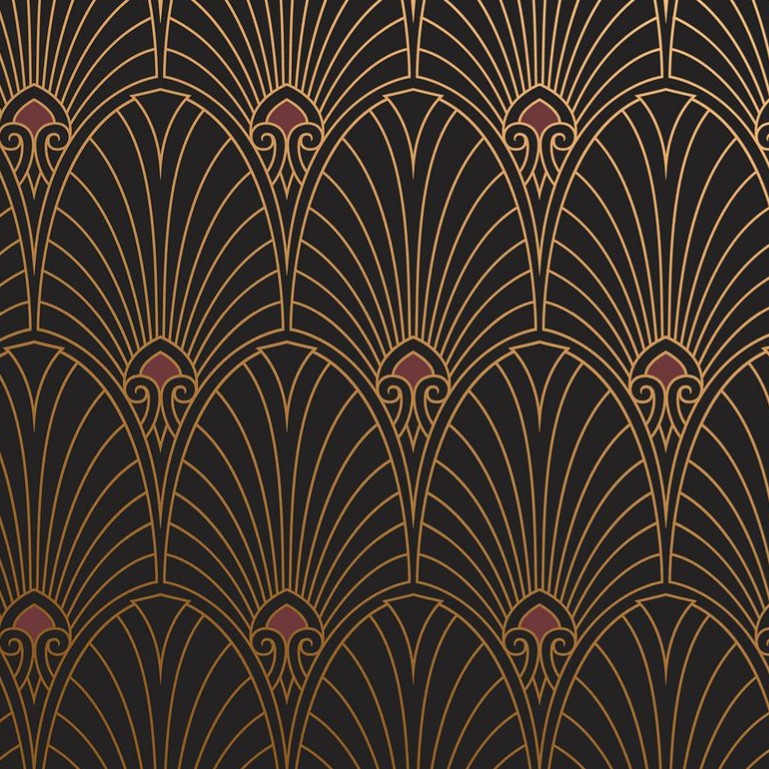 Applied art or architecture was born with the appearance of a new area during the crazy year. Because a new way of building has emerged. Build houses, hospitals, or schools.

As this is an art, the materials used are somewhat different. It's about using materials that the owner of the house owns for decoration, this is called ostentatious trend.

Art deco architecture has also played a role in the layout of the house, as it consists in spacing the house and unbundling it as much as possible.

The liners and their decoration 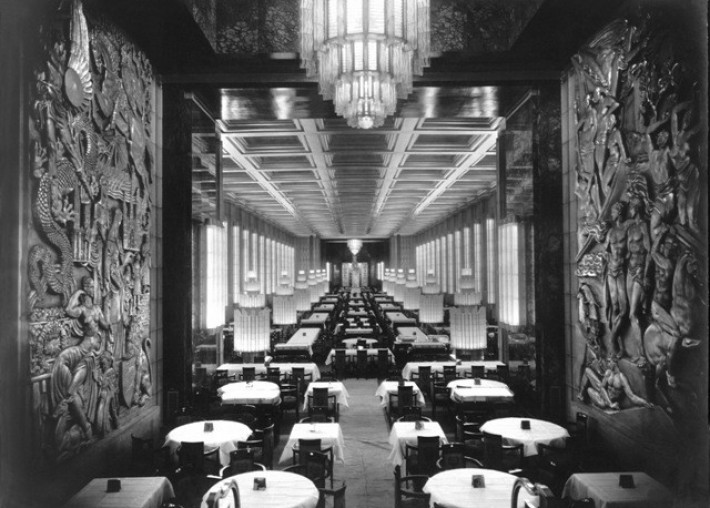 Also in the 1900s, ocean liners were a popular means of transport. For good reason, aviation has not yet appeared. So the ship's managers were doing their best to decorate their ship.

A décor that stands out from all, but inspires comfort at the same time. Thus decorate his ship was topical, the managers entrusted the work to specialists of Art Deco, such as Louis Sae or André Mare. A method that was used by the French and Germans.

At that time, having an ocean liner decorated with a luxurious décor inspires progress and opulence.

The art deco revolution has also had an impact on furniture especially, on the seats, leather and aluminum-like aviator chair, aviator sofa, buffet, dresser, console, etc. These are pieces made from chromeors or metals and wood with refinement. They are often placed in the living room to amaze guests. The art deco fabric armchairs geometric designs.

The sculptor is to move away from the design of the curves of art nouveau in the creation of this furniture. Indeed, he began to give charm to his work by using flat lines and surfaces, or even the triangular.

To accentuate the charm to the furniture, he combined different materials in these designs. Like leather, or metals or lucite. And of course, we must not forget the centerpiece, the color.

Even in furniture, the bright color still appears, especially on armchairs and aviator sofas. To give more charm to his crazy style, just associate the furniture with the right picture.

Although it was a much-criticized art at the time, art deco still holds an important place in society until now. Especially on furniture and paintings. And yes, many people want to enjoy a luxurious environment by adopting art deco. There are some who are looking for even authentic versions of art deco furniture.

Here are some tips that can help you build authenticity in your home:

The furniture of these periods differs from its forms, cubisms, curves and patterns.

The materials used at the time are scarce at the moment. If the furniture was made with wood, it is even feasible to determine the age of the furniture according to the condition of the wood. Ebony and macassar were among the most commonly used woods. 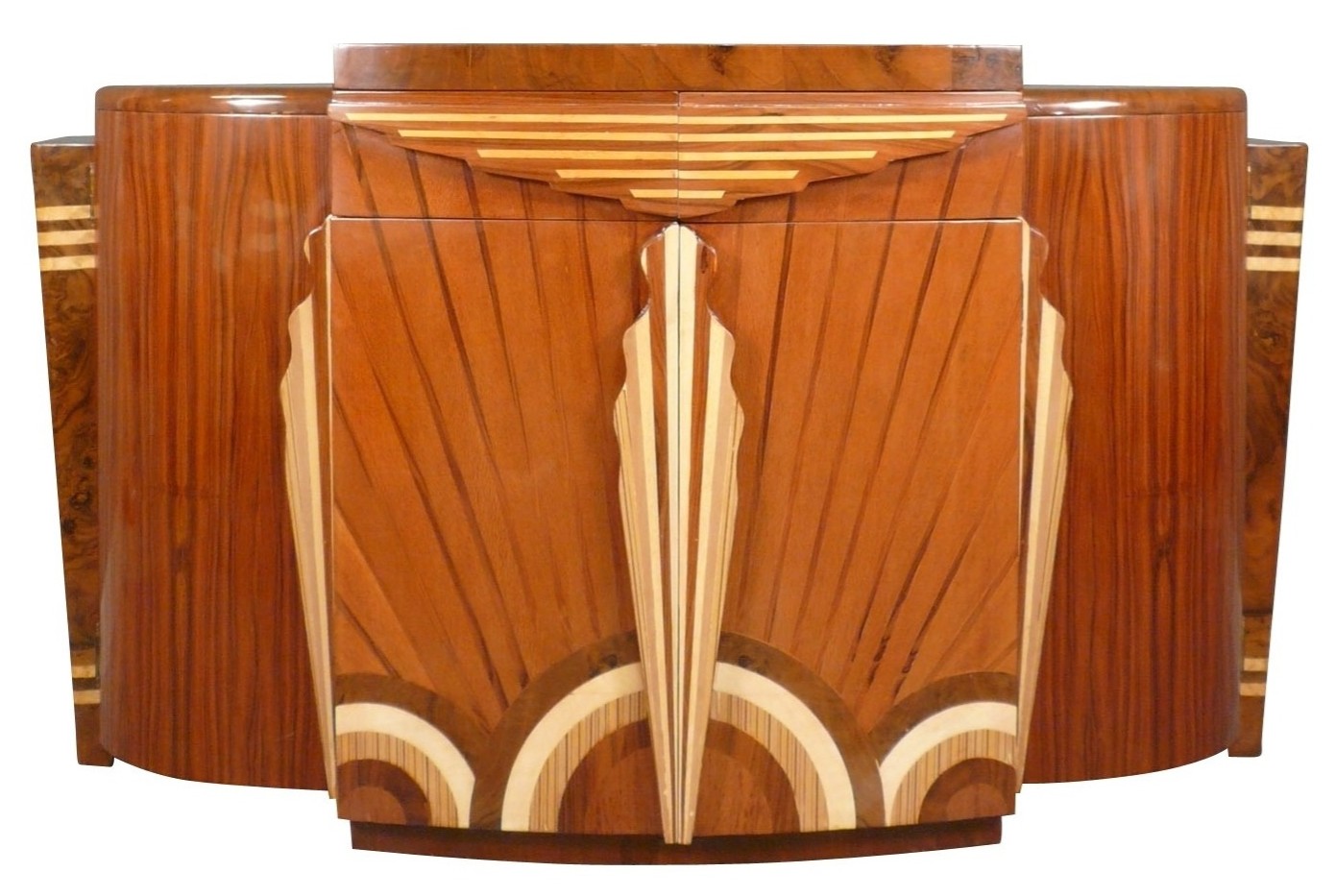 How do I recognize art deco?

Indeed, you don't have to be a connoisseur to recognize art deco. It is characterized by other arts thanks to its colorful environment and full of motifs. There are no particular motifs, whether flower ingself or linear motifs, all are considered art deco. This principle of color also puts its mark on the color of the furniture or the paintings placed on the wall, devoid motifs.

The difference between art deco and art nouveau is easy to recognize, the movement from the 1880s to 1910s is distinguished by curved lines with patterns representing nature. While furniture and architecture from the 1920s to 1930s gave way to straight lines and geometry.

A small bonus is the sculptures. And yes, this art highlights the sculptures of women, or others that inspire elegance. This form of sculpture is also visible on the decoration as on the vases, where it is drawn forms.

Something can revisit, but yes. Art deco still inspires as much elegance and joie de vivre in people. Now, some have incorporated velvet into his art deco. Like for example. Use coloured velvet to wrap the sofa, then cover the cushions with floral patterns.

Fanaticism is also beginning to incorporate shiny objects into their decoration. Like the use of silver libraries. But the most striking of all is the wall ornament. This habit has not yet disappeared. On the contrary, it wreaks havoc in the world of decoration