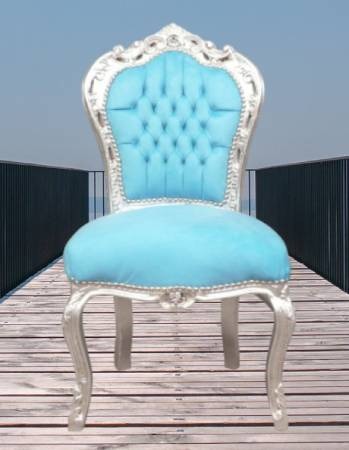 The modern baroque chair is both comfortable is beautiful, the trend to rococo style made in recent years are great comeback.

We live in a world where everyone wants originality in order to stand out from the crowd. In addition to the exterior, interior decoration has become a means of expressing one's personality. The Baroque style has thus resurfaced and has become a must in stylish homes.

We present its history as well as the materials commonly used for its making.

The Baroque style was born at the end of the 16th century in Italy and more precisely in Rome. Later it spread to several other European countries. The Baroque is a current that followed the Renaissance. Architecturally, the Baroque was at the origin of one of the greatest urban works that preceded modern times: the renovation of the city centre of Rome at the very beginning of the 18th century.

The Roman Catholic Church played a leading role in the expansion and popularity of the Baroque style. At that time, it was decided that the arts should address religious themes while having a direct and emotional involvement.

The dramatic side of Baroque art was seen by the Aristocracy as a way to attract the attention of visitors. Baroque palaces were built around reception rooms, grand staircases and entrances of styles identical to that of the courts.

What is the meaning of the word Baroque?

The baroque term is an ancient word that comes from the Portuguese "barroco" which means "rough or imperfect pearl". However, its French meaning seems to come from another source such as Latin or Arabic.

In the 1911s, it was believed that the word baroque came from the Spanish word "barrueco" which means "great irregularly shaped pearl." According to popular beliefs, the word was used in the jewelry industry for a while.

The term was used in the pejorative sense to emphasize the excesses and abundance of details that went against the characteristics of clarity and sobriety of Renaissance works. The word was first used in the field of architecture and then in the 1733s in the field of music.

In its modern use, the word baroque can refer to the idea of a complex thing with several details, without however referring to the Baroque style of the 17th and 18th centuries. Painting was the most popular type of Baroque art between the 1600s and the early 18th century.

Rich and deep colors, intense light, important shadows: these are the characteristics of Baroque art. Unlike in the Renaissance, where quiet rationality was taken, baroque works were made with the aim of generating passion and emotion.

Baroque artists are interested in the moment when the action takes place as opposed to Renaissance artists who preferred the moment before the action. For example, in the Renaissance, Michelangelo showed David long before he faced Goliath when a baroque work would show David as he threw a stone at the giant Goliath.

The Baroque period was characterized by painters such as Vermeer, Poussin, Velasquez, Rubens, Rembrandt and Caravaggio.

The concept of comfort has evolved particularly in the 20th century with the birth of new ideas for furniture design. The primary sector is no longer involved in the production of chairs on its own.

Several industrial companies have started to manufacture chairs. Everything becomes possible in the field of furniture: assembly of various materials, appearance of screws, etc. There are three main styles of modern chairs: the painted chair, the gold or silver chair and the transparent chair.

Painting a chair is a good way to bring a special touch to your room. Often, we think of the renewal of interior paint to renovate his room, but opting for a painted chair, in lase or not, can help to achieve the goal.

These types of chairs usually have a significant lifespan since you just have to pass a few shots of paint when you think they are no longer aesthetic.

The gold or silver chair

A metal chair has the advantage of being resistant. The metal does not usually break under normal circumstances.

In addition to its robustness, a gold or silver chair is aesthetic. It fits well into your décor while offering you maximum comfort thanks to its padded seat.

These chairs have a clean look and blend into any décor. They combine simplicity and elegance and are an excellent option to bring sophistication to your home. You can find them in all colors and shapes that adapt to your taste.

The armchair and the baroque sofa for the living room decoration

In order to facilitate its use in houses, the baroque sofa needs to be reworked since it was inspired by the old decoration. Italian chairs have the disadvantage of taking up too much space but today it is easy to build a baroque lounge adapted to the available space: small seats, rooms or studios.

If you're looking for originality, it's possible to combine this old style with a modern twist by adding, for example, a contemporary style cushion.

If you want to get out of the ordinary, velvet is a type of fabric that is perfect for baroque sofas. It brings a touch of luxury while offering maximum comfort. The design chair often adopts the faux leather, with a shape reminiscent of the Louis XV style.

In addition, who speaks of baroque armchair also speaks of coating. The leather coating adds a modern touch while the fabric is a more classic type of coating. In any case, there is a wide range of convertible, baroque-style corner sofas on the market. You can choose according to your preferences.

Where to buy modern baroque chairs at excellent value?

You have the opportunity to buy used baroque chairs that always maintain their original quality. That you prefer antique dealers for old baroque chairs or specialty stores, you just need to launch your order and the seller will be happy to schedule and take care of the delivery of the product of your choice.

Our HTdeco website offers a wide range of seating that will suit all interiors, specialist in rococo furnishings, discover modern colors and beautiful chairs of classic styles.