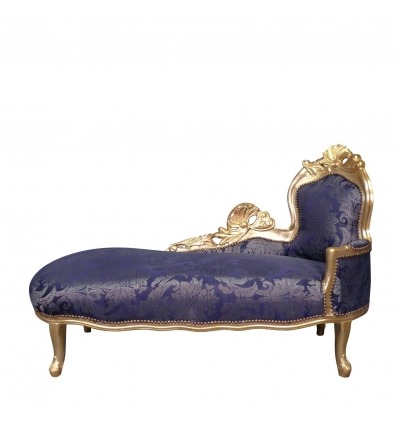 The blue baroque Meridian Gold wooden is a chaise used formerly for the NAP between courses of a meal.

The baroque Meridian with a blue satin fabric gold solid Beech King is an elongated Chair used formerly for the NAP between courses of a meal.

Assemblies and finishes benefit from traditional techniques by studs, ankles and mortises.

The padding is composed of high quality foam.

In France in the eighteenth century, the seats have prompted great concern. With a baroque Meridian, a model of sofa which is born at this time, you can live such a luxury. Symbolizing wealth and aesthetics, it is not uncommon to discover in a castle or a palace as the castle of Sconbrunn in Vienna, or even of the religious buildings such as the Cathedral of the Incarnation of Granada or the Abbey of Ettal. Stretching from 1580 to 1630, this Rococo inspired Michel Angelo in the design of some of his paintings.

This ostentatious style furniture stands out for its baroque décor, a reflection of the religious tensions of the time, a concept which appeared originally in Rome. The idiom has evolved in the 16th century to touch painting, sculpture, music, architecture and furnishings.

The baroque Royal Blue Meridian is as comfortable as a couch, his long seat invites you to rest or NAP. The Greeks or the Romans even used furniture of kind previously for their big meal. Manufactured with a solid beech structure assembled in a traditional way with tenons, mortises and plugs, as formerly, a compromise between ruggedness and aesthetics. The sculptures and finishes are worked by hand. The cover consists of a stylish blue satin fabric King, presenting a beautiful décor flourished through the Louis XV style.

This elegant sofa is perfect for a relaxing time in the living room with a Chair or sofa.