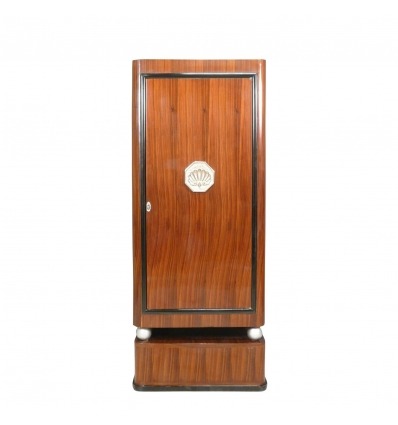 Art deco rosewood furniture opening on the front by a door with a lock, interior in mahogany marquetry. 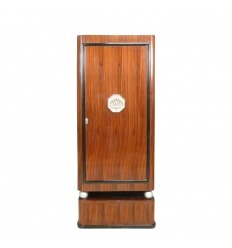 Art deco rosewood furniture opening on the front by a door with a lock, interior in mahogany marquetry.

Art deco sideboard in rosewood marquetry on a mahogany wood frame, opening in front by a door with a lock, interior in mahogany marquetry.

The varnish was applied by hand to the tampon.

Art Deco inspiration reached in the early twentieth century a popular influence in the visual arts, architecture and fashion. The style originated in France before World War I and has since been influenced by the design of buildings, furniture, jewelry and fashion. During its heyday, the Art Deco movement also fashioned movie theaters, trains, and everyday objects like radios. However, it is best known for its use in furniture and decorative objects.

This modern style for the time reached its peak in the early 1920s, when the end of Art Nouveau was at its zenith. Artists have been influenced by art deco and have embraced style in their work. The era of the 1930s saw the development of modern technology and the Industrial Revolution. This revolutionized furniture and made life easier for everyone. Many designers have adapted these developments in their work. Exotic materials were often used in decorative artistic designs. This style has also found its way into traditional forms of visual art, such as sculpture. And, because it focuses on contemporary technology, the style was even more popular than ever before.